Back To Blackness Castle

My son wanted to be entertained on a Sunday afternoon and so I took him to the nearest place of interest I could think of which was Blackness Castle.

As I grew up close-by in South Queensferry I had been there in my youth a few times when my parents had visitors and I returned as Hamish McTavish in 2002.

In those days I still had enough energy to take a ball with me and get some exercise while I was there, in front of the Castle.

My son had recently got a Young Scot card and when we went to buy our tickets they asked if he had one as he would have gotten a discount but of course, he had left it in the house. Fat lot of good it will do him there.

They said that until the end of the year he can get entry to any Castle in Scotland for only 1 pound, which I duly noted.

The Castle sits on the bank of the River Forth so you get a good view of the two Road Bridges and famous Forth Railway Bridge.

It is not the biggest Castle in the World, or even Scotland for that matter, but it does have a certain charm about it, or maybe that’s just me. 😉

The flogging scene from the TV Show ‘Outlander’ were filmed at the Castle.

Here is a clip I made about my idea for a TV Show involving Torture.

My Step-Father had told me a couple of days previously about when he had to do Guard duty at Edinburgh Castle for 2 hours at a time and not move a muscle while he did. I tried to replicate his pose, except I obviously didn’t have a Uniform or indeed a gun.

Inside the Castle there was a notice giving info about it’s most Celebrity Captive Cardinal David Beaton.

Here’s what the Castle looks like on the inside.

When I saw this notice I immediately said to my son, ‘Oh look, a Freemason’, and he immediately started to mock me about my strange so called Conspiracy beliefs.

However, when we walked past it the second time he looked at the bottom corner where it says, ‘Master Mason’. He pointed it out to me and I told him never ever to doubt me again. Of course he will though.

Then we found the most child friendly part of the Castle with these shield hoopla boards and of course being the ‘good Dad’ that I am, I let him win.

That was enough excitement for my boy and it was time to head off.

So, until the next time I have a visitor to entertain it was goodbye to Blackness.

Here is the video I made of our antics at the Castle. 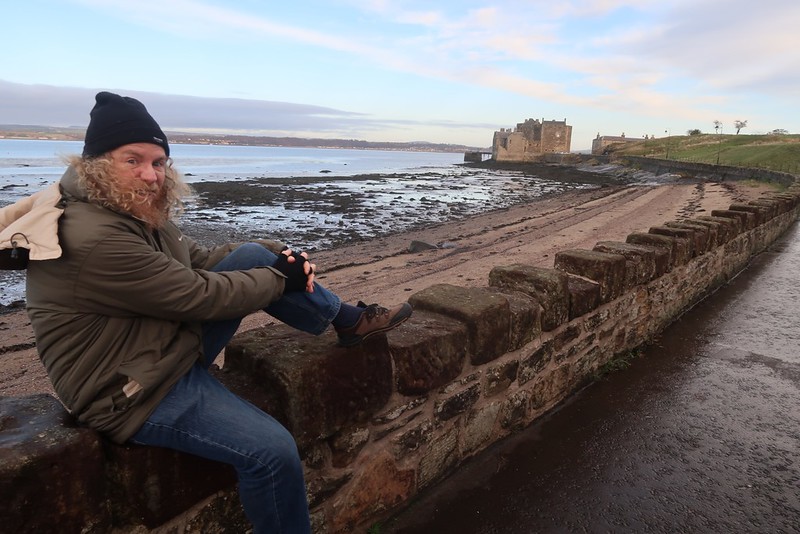