When I took my son to Blackness Castle I was informed that if he had a Young Scot card he could get entry to any Castle in Scotland for only £1 until the end of the year.

So as I was taking him to see a gig in Edinburgh on the 29th I thought I would save some money by going to Edinburgh Castle before the gig. However, it still cost me £18.50 for entry, so it did cost me more than I theoretically saved.

On the way from the Train station there were some control points set up for the big party that Edinburgh holds every year Hogmanay.

These have gotten more popular in recent years and as I have spent the past 12 years in Turkey I have never attended any of them but it is not my cup of tea anyway, being the old fart that I am.

Pubs too crowded, beer too expensive, too many people and taxi home hard to find and unaffordable at other times of the year, never mind on the most expensive night. Mind you, that would still be better than watching the Hogmanay Show on TV.

My boy was really thrilled with me taking him for a tour of the Castle, can you tell? No? Nor could I.

The queue to get a ticket was pretty long and the lady on the desk was actually quite surprised to see some Scottish people as much like the Festival we kind of let the tourists take over the town for the festivities and charge them extortionate rates to rent a room while we go on holiday until it calms down again.

On entering the Castle we saw the area where all the New Year Fireworks would be launched from and as we had already missed the One O’Clock Gun, there would be no loud bangs or explosions for my son to enjoy that day.

There was also a great view of the City and the River Forth in the background.

I was quite thrilled to see Mons Meg in the Castle as I can remember learning about it in School. On the information board it said how it was the ultimate weapon of mass destruction in it’s day, which brought a great laughter of mocking forth from my boy. Oh, to be young and know it all eh.

My son wasn’t showing a great deal of interest in reading about the History as YouTube has warped the youths brains and things like actual reading are a bit of an effort these days.

In the past he used to take photographs better too but even that is proving too much of an effort so I was left with this half hearted blurry photo of me in the guards hut. Thanks Boyo.

We then went to the old Castle dungeon area before going to the modern Prison where they put soldiers these days if they don’t follow orders accordingly.

It reminded me of the time I was arrested at Ibrox football Stadium for having a half empty small bottle of Limeade on my possession and I was thrown into the back of a Police van and taken to Govan Police Station Cells in a state of disbelief.

This cell was about as comfortable as that one except I never had to share it with a psycho Rangers supporter from Sunderland for 3 hours.

We then headed off down the Grassmarket area to get some food and go to a pub to watch the football before the gig.

My son wanted to go for a McDonalds but I refuse to go there so instead we went for a Chippy. I ordered a Smoke Sausage supper and I saw a Burger on their menu so suggested my son try that to which he agreed.

I was surprised though when they pulled out a ready made battered burger and stuck in a roll within seconds which looked nothing like the one in the photo. I should have put it back but my son had already asked for brown sauce on it so we took a seat.

He took one nibble and wasn’t too impressed so I offered to swap my sausage for it being the ‘good dad’ that I am. Oh boy, did I regret that. To say it was absolutely minging is an understatement. The word I used was ‘humdinging’ but even that wouldn’t do it justice.

As I had paid for it though, I finished it….while my son pissed himself laughing at me. That will be the last burger I ever get from a Chippy.

I then tried to find a pub I could take my son into to get a couple of drinks before the gig and also to watch the footie as we still had a couple of hours to kill.

It turns out that most of them wouldn’t let him in but The Beehive Inn had an eating area where he could stay until 8pm as long as we ordered some food, so he milked that one by getting me to order him a Cheesecake everytime I went to the bar.

I asked him if he knew who the people were in the paintings behind him were and he says he didn’t. I told him he had been up one of their monuments to which he gave a hearty chuckle and eventually remembered Walter Scott.

He didn’t remember Rabbie Burns though even though we have talked him about him more than a few times with my Step-Father at the Dinner table.

I pointed out that in the painting he was doing the Hidden Hand of Freemasonry pose and my son took the piss out of it and mocked my conspiracy beliefs once again.

I tried to explain that Rabbie was indeed a Freemason but to no avail. Planing seeds though. Knowing my boy he will probably join the Freemasons just to spite me.

Here is the video of our time at the Castle.

After the match finished it was off to The Liquid Rooms to see some Rock’n’Roll. 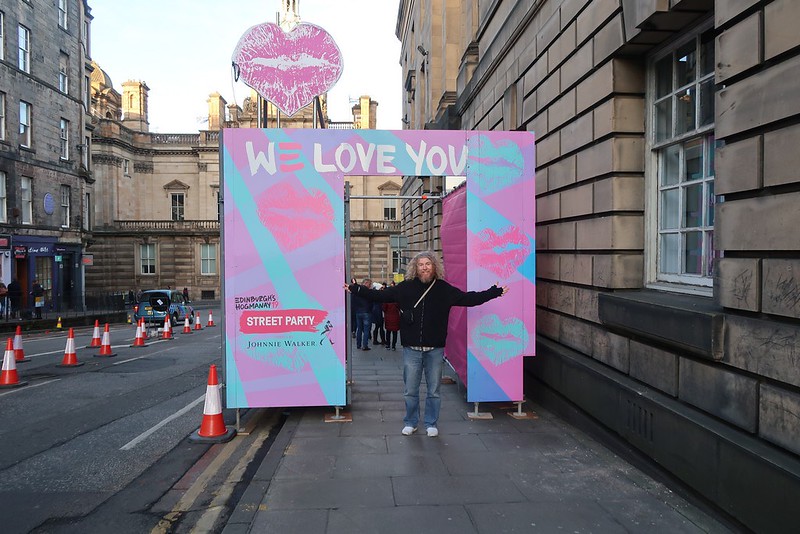