I have been back in Scotland for one month and loving it! Today I had to go to Edinburgh to hand in my application for a Private Hire Licence so that I can join the ever increasing world of Uber drivers.

I am not sure that there will be much of a future in this for the long term but in the short term it would beat the Food factory job where I only get the odd day here and there through an agency.

Walking through Princess Street Gardens on my way to the Council building was nice even though they have recently chopped down many an old tree much to the dismay of the general public.

Still, at least the Highland Soldier still stood proud despite the Pigeon droppings he has to tolerate.

After my appointment which went pretty smoothly I had some time to kill before my Sister would arrive later in the day with my boy in tow. She was going out with her workmates for a Xmas Drink and I invited the boy to join me so I could take him to a surprise gig.

While walking around I spotted Monkey Barrel Comedy Club which I had joined on facebook but had no idea where in Edinburgh it was located.

Good to see another full time comedy club in the City apart from The Stand.

Walking past one of the many Tartan galore Gift Shops I spotted this Piper which I thought would make a good facebook profile pic. I was right, it got more likes than my ugly mug usually gets.

As I was walking past The Tron Kirk I noticed that there was a World Heritage Exhibition on and so as I had time on my hands I went in to check it out.

It was quite interesting and worth going to check out if you are passing by the Kirk. They also had a shop section within it with quite a lot of unusual items. You can check out some of them in my photos below.

I then headed off to the Train station to wait for my sister and son and on the way there I passed by Belushi’s which was the venue for Nob’s Edinburgh Festival Show in 2011 entitled ‘Comin’ At Ye’.

The people were very nice and it was quite central although I am not sure if it was the best performance area for a show but he got through it, which was the main thing.

When I got to the Station I went into the newsagent W.H Smith to buy some unhealthy cheap food to eat until they arrived, cause I was too tight to go to a cafe and I am not a fan of Starbucks.

While in there I spotted these four books in a row in quite a prominent position on the display. It is not like they are not telling us what is planned or indeed actually happening, but most folks can’t take their heads out their cellphones long enough to pick up an actual book these days.

I had brought David Icke’s new 700 page book, Everything You Need To Know But Have Never Been Told, with me as I knew I would have to wait a while and so sat in the Station waiting area and had a couple of wee naps in between reading a few pages.

As I was waiting I saw a ticket fall to the floor so I asked the lady who was standing beside it if it was hers but she told me she had one of these new ‘Smart’ cards and so didn’t use the paper ones.

I checked the ticket and it was a single to Glasgow. As I had come in on the Bus I hadn’t purchased a return ticket for the train and as I had to get on the Glasgow train to get off at Linlithgow, I found myself with a free ticket home as the dropper of the ticket was now long gone. Result!

About an hour later my Sister and son appeared and so she went on her Merry way and I took my son out of the station to be greeted by the sight of the German Market and Fairground which were situated in Princess Street Gardens.

My son was wanting a haircut and so I took him to Alfie’s where I used to go about 30 years ago. Let’s just say he got a pair of knickers with it. You can see the blog about it here.

The boy was feeling pretty sorry for himself and so I took him for a good old Scottish Chippy but even a Smoked Sausage Supper and Irn Bru didn’t cheer him up so we I told him I would take him to a gig but he just wanted to bury his head in a hole for about 6 months.

On the way to the gig which was to be performed in St Marks Unitarian Church we passed a couple of record shops which we popped into to try and take my sons mind off his botch job and spotted a festive poster advertising a Beatles Box set.

After taking my son to a Coffee shop and still failing to raise his spirits we went to the venue where I met Duncan who was the promoter of The Cosmic Dead gig and it was through his fb page that I found out about this gig, but who I couldn’t get my photo taken with previously because of camera issues.

Well, I soon rectified that, had a quick chat with him and God Bless him he tried to say my sons haircut wasn’t that bad and then we went to take our seats with my sons face still tripping him.

The support band were called Run Into The Night and who reminded me a little bit of The White Stripes, if only because they were made up of just a guitar player and a drummer although the guitar player was a lady in this band.

I enjoyed their set and my David Icke book came in handy to set my camera on the Church Pew Shelf to video some of their set which you can see below.

The headline act were Juniper Grave who in fact were hosting the night to launch their first album Of Hellion And Harridans.

There were almost an all female band too but although their drummer had the longest hair, he was in fact a bloke, at least I think he was, you can’t be too sure these days eh. Their singer was really good and I am just sad that my camera battery died before their last song because that one was truly epic.

Their Bass player and guitarist helped out with vocals too.

Afterwards we headed of to meet my sister and her friends at the Xmas Ice Rink area which had a Bar located in the centre of it. They again tried to say my sons haircut wasn’t that bad buy you could tell they were trying to be kind. He got a Hot Chocolate there but was still in deep depression.

When we got back to my Mothers house and showed it to her and my Step-Father he couldn’t help but laugh at it and they couldn’t hide the fact that he should have got an extra large knickers with it, such was the size of the arse they made of it.

Video Blog of The Day

Run Into The Night 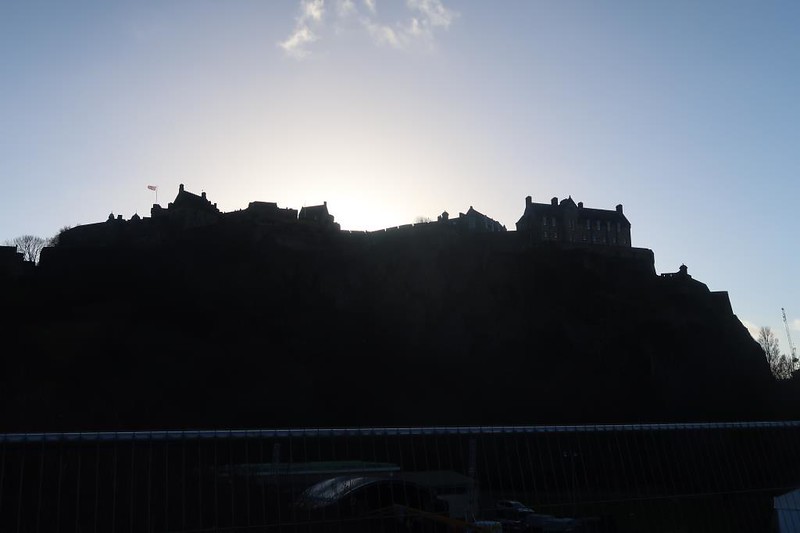