I was invited to be a guest speaker at the big demo for September in Scotland. When I got there I was told I was an open micer to go on after Jam For Scotland and the March in the second half so that put me on the back foot straight away.

I did mention the fact that I can’t really afford the parking but that got ignored.  Paddy Hogg told the crowd that the wonderful amazing saint Doleres Cahill just found out she would be arrested if she set foot in the country because their was a warrent out for her arrest for speaking at a London Rally.  Pity she doesn’t know Common Law, perhaps she should talk to Robert.  I trust it wasn’t because I would have brought up the fact her whole profession of virology is 100% fraudulent.

I do believe we are in a spiritual battle but not a religious one. Still, the preacher man done his bit to stir folks up with a bit of Jesus.

There was a few audio problems for this professor who believes Covid is real with a 99% survival rate.

Next up was Peter Chan who admits something is wrong with the vaccines but still said Covid was real. To be fair when I had a chat with him afterwards he did know the difference between Germ Theory and Terrain Theory.

Robert was buzzin’ and rallied the troops in his own unique passionate style.

Then this guy wanted to tell everyone about Trump and Q and the White Hats, so I’m guessing he was a VIP guest speaker too.

Then most of the crowd went on a march through the town and even a shopping centre shouting about the vax to confused shoppers while Jam For Freedom done their bit in the square to keep the atmosphere lively.

I went to the park bit to do a quick video for the vblog below.

After the break in the open mic section this guy at least talked about the fact that there is no virus.  The organiser said his was the best speech of the day and called it Absolute Truth.

I had lost the will to live by this time and so decided not to do anything and nobody seemed too bothered by that anyway but it was good to have a wee chat with Janie and Alan on our way to check out the car parking bill.

Here is footage from the day.

I do kinda wish I stayed around to perform my poem, The Truth but I just wasn’t feeling it. 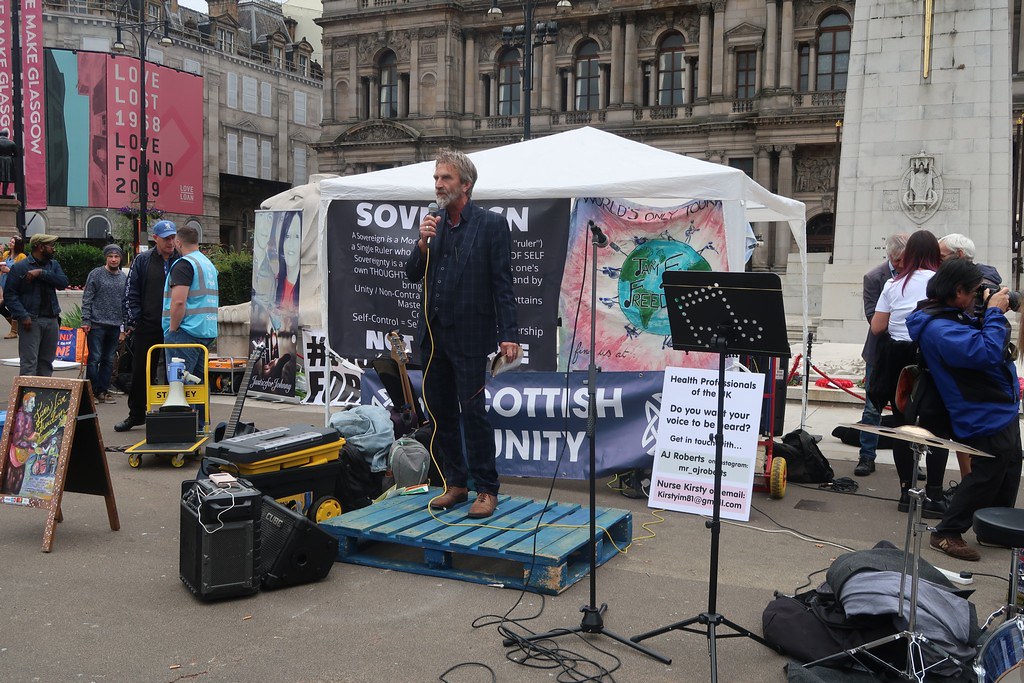