I thought I had better show some parental interest in the laddie so I took him to see some local sights and I’m sure you can tell by the photos how enthralled he was to spend some time not staring at his phone.

The first trip was to Linlithgow Loch which is overlooked by Linlithgow Palace.

This is where the Music Festival, Party at the Palace gets it’s name from as it is held quite close to the Palace.

The Geo-Engineering pilots must have been feeling very patriotic that day as they sprayed not one, but two St Andrew’s Crosses (Saltire’s) in the sky, leaving us all feeling Double Crossed.

Here is a video we made on route around the Loch.

We then walked through the town centre to get back to the car and on passing a Barber’s shop I spotted this sign aimed at Boys with a sweet tooth and in need of a trim. It would have worked for me back in the day.

Hell, if I decide to get a trim these days that’s where I’ll be going.

Then we came to the Cross Well is accurate replica of its crumbling 1628 predecessor by John Ritchie which has some pretty creepy carvings on it if you ask me. Or maybe I’m the Creep.

A couple of days later and it was time to get my son some Sunday sunlight as he only has a couple of hours between getting out of his scratcher and sundown, so I took him to Calendar Park where Vibration Festival will soon be held.

I saw The Coral play at Glasgow Garage about 15 years ago and I would consider going to this gig just to see them again.

We passed in front of Calendar House but didn’t take my son inside as it costs money and he wouldn’t be interested in it anyway. Maybe one day in the distant future if AI hasn’t taken over all his senses by then, he may be.

Now, this has to be one of the most shit things in the world. What the hell is it? Some kine of metallic Pie Chart? At least the Grafitti telling you to smile cause it suits you redeemed it’s utter crapness a little.

After walking around the pond I found a cool place for a wee lie down.

Unfortunately we were just a few days too late to find out about the Guitar Heroes show that was on in Falkirk. Shame as it looks like it would have been a good evening’s entertainment.

So that concluded my Fatherly duties for another week. Stay tuned for more adventures as we come into the Spring and I have to go further afield to see some more cultural points of interest of which my son will be ecstatic to witness I’m sure. 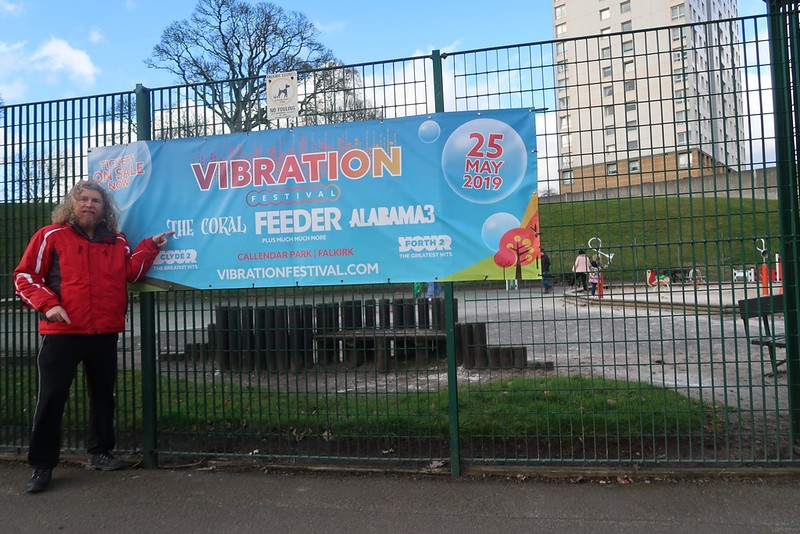