It was the day that Bo’ness Town was to switch it’s Christmas Lights on and they don’t do things by half measures here as in the main street they had set up some stalls selling homemade wares, some food vans, a stage, fairground rides and even a small Bar.

My favourite though was the Sauces Cow!

I had promised to take my son to Corvi’s so he could sample the delights of a Scottish Deep Fried Chips and in the window of the Chippy there was a reminder of the reason for the season……apparently.

I had to explain to him that a Supper in this case doesn’t mean the last meal before bed but rather it means to have chips with your order. For instance a Fish Supper means Fish and Chips.

I also introduced him to the concept of having a large pickled onion included as a delicacy. I take my Fatherhood very seriously.

I’d heard that Santa and his Reindeer were in town but I thought they would have went to a bit more effort than an inflatable one.

I was right as when we went into the local Library to get my sons new Library Card which he will probably never use such is his addiction to his gadgets, that I found the real(ish) Santa in there, probably hiding from all the children chasing him to ask for specific presents. He found the saftest place in town to lay low.

He asked me if I had been a good boy this year and me being me I had to give what I thought was the funny answer and said no, so he said ‘Oh well, no sweeties for you then’. Doh!

You have to admire the optimism of the organisers by bringing some of the rides which weren’t exactly fit for Scottish winter weather. They even brought an Ice Cream Van!

Some of the women in this ride were a bit too scantily clad for my liking. They’ll catch the bloody death of cold!

Thankfully none of the youngsters were following their examples and were well wrapped up, including these ones who were there to sing some Christmas carols.

My son wanted to leave as me singing along with them wasn’t his idea of a good time. Unfortunately that meant missing out on the Rock Band which played about an hour after we left.

However, on the way home we did pass a Pipe Band.

Then we saw Santa again who must have been kicked out the Library to be re-united with his Reindeer. I guess they must have crash landed in Bo’ness and needed to find some Fly Agaric Mushrooms before being able to take off again.

Here’s the video of our little adventure. 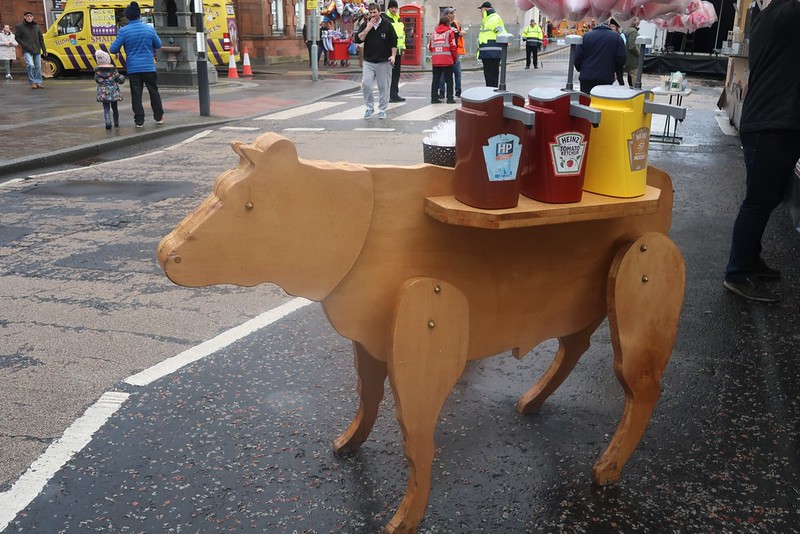