I went along to the final of Lach’s Anti-Hoot open mic competition that I had entered at least 3 times but didn’t make the cut, so that’s how I knew that it would be an unmissable spectacular night’s entertainment and so went with my video camera in hand.

I got a good seat at the front and videoed as much of it as I could before leaving for my train. As you can see the standard of acts was very high and the crowd were very considerate of their talent and in the main, stayed quiet and listened to what each act had to offer.

Check the acts out for yourselves…

Lach was the host of the evening and a fine job he always does too with songs and sponsor announcements.

Three young dudes make up this formidable punk outfit. I loved them.

Dan had sold his car to buy his guitar but a string broke on it at the end of his first song. He borrowed Lach’s and finished his set in style.

I sat transfixed at Graeme’s fingerstyle guitar playing for most of his set.

Christopher dropped the pace a bit but his songs still shone through.

Matt had just returned from America the day before, telling us how he took his guitar on a 1,500 mile round trip and played one song at an open mic night the whole time he was there. Shame the Yanks missed out on hearing more as another fine set was chalked up at the Superhoot!

At the break I went outside for some fresh air in the smokers area and got chatting to a lovely girl from Ireland called Sarah.

I also had a good chat with Graeme Mearns and told him I loved his set, and for that he reached into his back and gave me a free copy of a CD his band had made. Cool.

It was then back in for the second half….

Chelsea was the only non-musician on stage tonight and she done the written word crowd proud.

Stringjammer has a very relaxed manner on the stage and is a great package of fun, spontaneity and of course, good songs that get the audience rocking.

Sam told me that he had never used the pedal that he brought with him that night. Well, maybe not that one, but I’m sure he has used at least one other one quite a lot as he built up layer up layer of guitar, beats and vocals to pull of something I thought, was quite special.

Alex doesn’t have much thrills and spills and nor does he need them with songs this good. I loved the first one in particular.

It was nearly time for my train so I went up the back of the pub to hang out for a while and enjoy a bit of the night without holding my video camera. I wish I didn’t though because Calvin Arsenia came out and set the place alight.

I had videoed him a couple of weeks before but I wish I had captured this set also as it was really awesome. He reminded me of Jeff Buckley, who I have also seen live, and that is a high a compliment as I can pay him.

As I listened to Calvin, I met Craig Finnie who I had videoed both as a solo performer and with The Lost Weekendzzz when the qualified for tonights final. He asked if I could film them as they were on next and although I said ‘No’, as they were setting up I went down to the front to see if I could get their first song.

In the meantime I met this guy and got chatting to him. He told me he had seen me perform my poem ‘Falling‘ the previous week and said it was funny. Fair enough. I’ll take any compliment although I didn’t write that one with laughter in mind.

The Lost Weekendzzz weren’t ready by the time I had to leave so I missed their set as well as Ibro’s.

Here is a playlist of the acts that I filmed.

I recorded this walking to the train station.

The winner was Christopher Willatt and although I didn’t think he would win, I can see why he did as his songs were exceptional also.

So he will now be in the Hall of Fame at Henry’s Cellar Bar and a new round of Anti-Hoots will begin, lasting for 6 weeks until the next Superhoot on April 1st.

If you can you should get yourself down there on a Monday night and support the local talent. Got to be better than X Factor any day of the week. 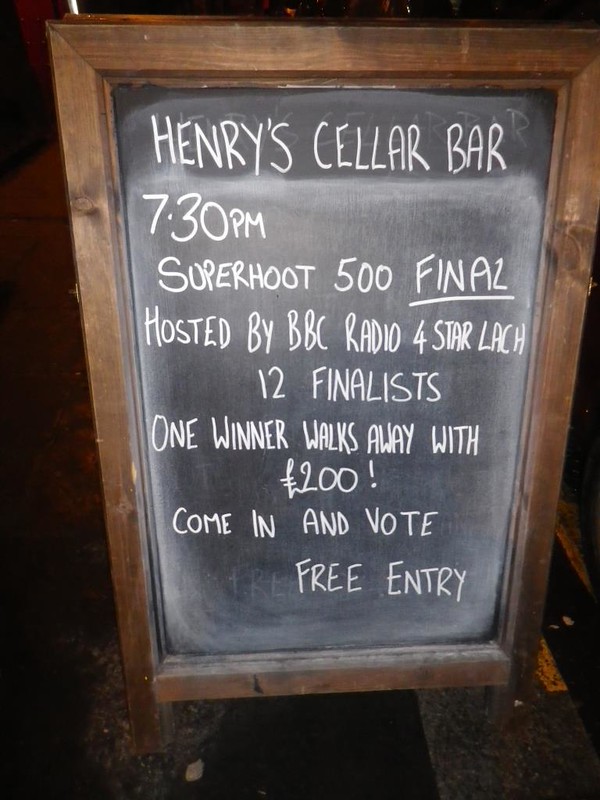